As the storm was brewing we made our way to Abbey Dressage today with Ali and Donovan for the Elementary and Medium respectively.  In preparation yesterday I had to clip Donovan again for the 2nd time this autumn because he seems to insist on growing so much hair!!  He is however a complete gentleman to do, which makes life easier although I still feel like I have hairs everywhere!  It meant they were both looking very smart today though (with Ali having been clipped last weekend).  Their preparation had not been ideal with some very busy extra long days at work for me but the expected schooling in the dark at both ends of the day for this time of year!

My mood was cheered on Friday evening when I got back from work and was flicking through the British Eventing Life magazine an spotted this picture of Ali and I from the Nick Gauntlett XC demo we did at Blenheim in September!!

Back to today… Ali was on first in the Elementary and despite the wind and a rather heavy shower warmed up rather well.  I was really pleased with her test with just a small mistake at the end in her first test at this level.  She scored 66.25% gaining 4 points with the judge commenting that she just requires a little more engagement – this will improve as she strengthens up.

Ali looking pleased with herself after her test

Donovan started warming up well with me trying to get him really forward and in front of my leg.  When we went across to the arena though he was so spooky, which meant I had to use more rein than i would have liked (otherwise we may have ended up facing the wrong way…) so he became a little unsteady in his mouth and short in his neck.  I think I may also have pushed him a bit too forward so he lacked engagement (probably not help by him spooking so much!)  I had a really useful chat to the judge afterwards who was very helpful in her comments and encouraging!  I have also managed to find some videos and look back at some tests he did before his injury – I think I need to slow down and get him sitting more (as well as keeping the forwardness, impulsion etc  etc…..)  I’m sure we’ll get there!!

Cheeky boy in his favorite place so he can see what’s going on!

After Ali’s fab result last weekend she has had a slightly quieter week this week with just a couple of hacks and schooling sessions, she’s feeling and looking really well though.  We’ll be doing some dressage and showjumping until more of a break for her in the deepest darkest time of winter!!

Donovan is looking very smart after his full clip (including his extremely hairy legs) – I’m sure he must feel the cold more than any other horse because he gets sooooo hairy!! Pleased to be rid of all the hair this year as we left most of it on last year (for safety reasons!) when he was just in the walking stages after his injury. 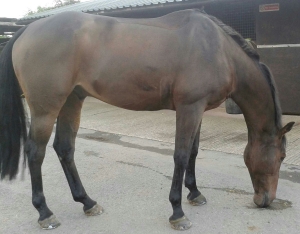 I have swapped him to fixed bits on the double bridle and bought a new set to fit him as he was being a bit “mouthy” in the loose bits, he is improving and feels great to the rein most of the time keeping still but soft in his head and neck but is still playing with the 2 bits a little to much than I (and more importantly the judges) would like for a test. His flying changes are really improved though and he usually does them when I ask without a buck or leap at the same time!!  This is great as it means as soon as he is more settled in his mouth we should be able to move up to Advanced Medium!  On Saturday I did a mad dash from work finishing a little late at 1:30 pm down to the indoor school where the Three Counties Dressage Group were running a test day – you are judged riding through a test as you would be in competition but the judge then gives feedback + points to work on afterwards.  Mum had kindly brought Donovan down in the lorry with her horse.  I was really pleased with him as we didn’t have long to work in but he went well and his half pass I felt was much improved and we got good feedback on it.  The judge really just said he needs to stiller in his mouth for the higher marks and loved his extended walk, which he usually can be lazy in!  We’ll keep practicing ready to go out and do some more tests soon, trying to keep motivated as the nights (and mornings at the moment) draw in and we have to ride in the dark more often!

We had a fantastic weekend at the beautiful Osberton Estate in Nottinghamshire for the British Eventing Young Horse Championships with Ali.  It was my aim for the season to qualify for and compete at these championships – so it was brilliant just competing here!

I didn’t have the best preparation as in the week leading up to it I got a horrendous cold so was snuffling and coughing everywhere, fortunately I felt much better by the weekend, although I didn’t sound it!  Luckily I managed to swap and get the Friday afternoon off work and it wasn’t too early start on Saturday – we left at 8:30am for the 3 hour journey up north.

Our dressage was early afternoon so we had plenty of time to get our bearings and collect our things.  We were in the second arena but even this had trade stands all the way round with a Christmas crafts fair down 1 side.  It was by far the most atmospheric arena she had been in with plenty of flowers to spook at.  She worked in well and was moving nicely and being quite co-operative!  I was correct in thinking she would be better in this type of arena where she could see everything than next to a hedge (where something could of course be hiding haha) and she only spooked once unfortunately spoiling a lovely correct rein back – as I asked her to step forward again something behind her spooked her and she tensed at shot forward just a couple of steps.  The rest of the test went well though and she scored several 8’s and a 9 for her extended walk!  I was really happy with a great score of 45.6 for 9th place out of 80 starters after the dressage, especially in the company of so many professionals.

We show jumped on Saturday late afternoon and despite her dressage test earlier in the day she was rather fresh to start with working in so I was relieved I had left myself plenty of time and did plenty of cantering to settle her.  She jumped a fantastic round and was jumping so big at the start of the course!  We had a unlucky 1 down, which she just tapped coming down the hill but I was still pleased with her round as it was the biggest course we have jumped eventing.  There were quite a lot of faults in the show jumping but no so many in the top few so we dropped a few places and went to the cross country on 49.6 in 15th place.

On Sunday they ran the last 15 or so horses mainly in reverse order so we didn’t go until 12:30 – this meant having to try to keep busy so fill in the wait!!  We drove back to Osberton from our stabling for the night at 8:30am, I took her for a 30 minute ride hacking round to one of the schooling areas and working her round for 15mins and she felt good – forward but not too fresh.  I walked the course again and then got her ready to work in.  The facilities for working in were excellent with a large field to get a good gallop and lots of different types of fences to get your eye in over.  It was a great track but there were a few tricky combinations, including a step to brush out of the water, coffin with big ditch and angled brush out and 2 skinny houses on a turn in the woods, as well as some big “kick-on” fences!  See the course photos here.

Ali was fabulous taking all the direct routes with just one hiccup with a slight “miss” out of the water (totally my fault) but she was amazing and picked herself up to jump the hedge then popped straight through the coffin foot perfect!  She came home with just 2.8 time faults to finish an overall 14th!!  Such an amazing end to her season. 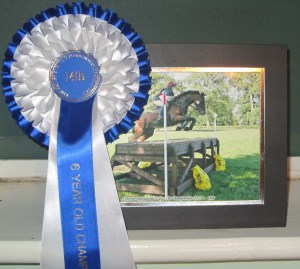 See photos of us in all 3 phases here!

It was great to see 2 other horses by Take It 2 The Limit (owned by Hartpury College and standing at Glenwood Stud) competing in the 6yo Championships – Hartpury Sky Is The Limit finished a fantastic 2nd and Hartpury Take It 2 The Top completed clear cross country at his first international event.  We are hoping to put Ali’s dam in foal to him again next year!