We were less lucky with times than for our first events this season with an 8:30am dressage for Ali meaning a 3am start to leave home at 4am!  When we arrived the cross country course was still being set by the wonderful team at Aston, due to a huge amount of rain the day before.  Everyone was extremely grateful for the massive effort to move jumps etc. so we could still have a run after one of the fields was unable to be used.

Ali warmed up nicely for the dressage and I was especially pleased with how well she coped in a very busy warm up with restricted space because of the arenas being on the surface, she did appreciate the lovely going underfoot though!  She did a consistent test, which was slightly harshly marked in places for a good score of 30.9 . The show jumping took place on the upper level of the all weather – she felt so much more confident and rhythmical now that she is getting more experienced jumping at this height but just clipped the spread into the treble behind, slightly backing off when she saw part b and c.  I was a little annoyed with myself as I felt I had got distracted thinking about the previous fence and maybe not quite kept the energy enough into the treble, paying the 4 penalties which would eventually cost us the win….

Once again she was fabulous cross country.  The track at Aston was not quite as big as Kelsall but had a strong water: a “twisted table” type fence on a left hand turn 4 or 5 strides to a big brush drop into the water – this is the one I particularly wanted to get “out of the way” especially as it came early on in the course at fence 5 due to the course change.  It caused quite a few falls throughout the day so I was delighted when Ali just skipped through it!! (video to follow) 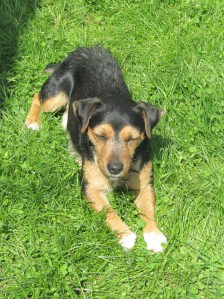 Todd sunbathing in the glorious sunshine we had all day!

Quick wash off and ice legs for Ali and swap onto Donovan… I am really pleased with how much better he is going on the flat since my last lesson with Nick, mainly be riding much more forward (thanks Nick!), which I feel is also helping his show jumping.  He worked in beautifully and despite a couple of mistakes in his test, including breaking into canter in the first medium trot (and worrying that the bag of wood chips nearby may attack at anytime…), he scored a brilliant 29.6

He show jumped fantastically, pinging over everything including the last full brick wall that I thought he may be spooky at for a clear… now all to play for and try to go a bit quicker XC – I was trying out using the “jaw strap” on the Universal bit he jumps in.  Compared to Ali I really had to kick on to get him faster between the fences even on the longer stretches but he was good at the combinations and jumped well out of his stride, the strap does seem to keep more “up” in his gallop.   I was pleased to pick up just 2.8 time penalties to finish on 32.4 but we were just pipped into 2nd by Piggy French! 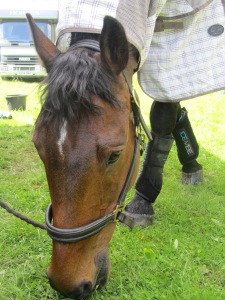 Absolutely over the moon with both of them though and never would have imagined a 2nd and 3rd placing at intermediate on the same day 🙂   Also message of the post to all of you with an injured horse or pony – persevere, stick to the exercise plan and take it steady… Donovan is proof they can come back and in his case better than ever, he is so happy and just loving being back eventing 🙂 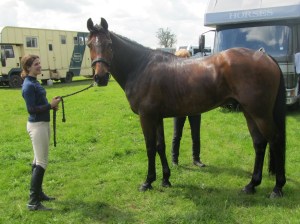 Next stop Tattersalls CCI* with Ali – let just say I’m rather excited to be off abroad for the first time with a horse and even better get to learn from the best travelling with team Gauntlett!!!

Ali and Donovan both went to Hartpury today for the British Show Jumping ahead of their next intermediate at Aston on Wednesday. There weren’t many entries so I took Ali in the 1.15m and Donovan in the 1.20m so that I had time to swap!Both of them kept a lovely forward rhythm and I was pleased with how rideable they stayed, especially as they both did fast work yesterday.

Ali had a bit of a miss at the water tray when I didn’t ride forward enough off the corner so we demolished that one but I was very impressed that she didn’t lose confidence and carried on to jump the rest well.  She makes such an effort and tries so hard.  Donovan had 4 faults too, just clipping the last!  The sun even tried to come out before we left! 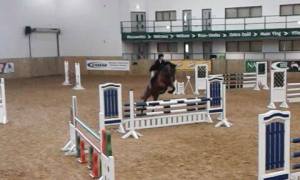 Ali jumping into the first double 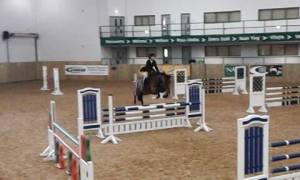 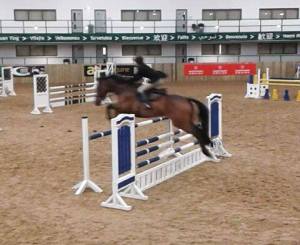 Donovan into the first double in the 1.20m

Managed to squeeze in fast work sessions on Ali and Donovan today ahead of their next Intermediate at Aston Le Walls today between being hooked on the coverage of Badminton XC – a true 4* test that caused problems all the way round!  Huge congratulations to everyone who completed and especially my brilliant trainer Nick Gauntlett who had a fantastic round on his young horse Grand Manoeuvre at their first 4* together to go into the top 20 overnight before show jumping tomorrow.  Such an exciting horse for the future 🙂  It was good to see some lovely mares completing well too, Nicola Wilson’s young coloured mare did a great round.

Both Ali and Donovan have been going well on the flat since my last lesson with Nick, when he got me riding more forward to get them to take the rein out and down more – at first this felt rather fast especially on big, powerful Donovan but I am getting used to it now!  I was on call all last bank holiday weekend and Monday so haven’t taken them out but tomorrow we are off to Hartpury for some show jumping before Aston on Wednesday.

Flicka, just 4, has been out to her first small show – she was very well behaved and completed her Prelim dressage test staying in quite a good rhythm and not leaving the arena for 63% 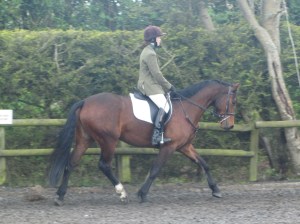 Flicka at her first local competition

In other exciting news for those that don’t follow on facebook or twitter… Ali and I are going to Ireland for the CCI* at Tattersalls International Horse Trials at the end of May.  I am really grateful to Nick for letting me travel over with Team Gauntlett – such great experience to learn from in our first trip abroad!!