With our first event only 2 weeks away training is in full swing, including fitness sessions.  Unfortunately after this week’s rain the field is too wet now so we made our first trip the gallops.  We are very lucky to have brilliant facilities only a short lorry ride away.  Thankfully Mum could come down with me, I finished work on time but am 2nd on call this weekend so with Mum there I could whizz off if need be!

Ali felt very fresh at first and thought the sheep in the middle were terrifying – needed my seat belt plugged in at the beginning!! 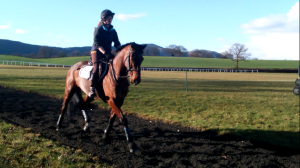  She felt great on our 3 runs up the 6 furlongs though, gradually going faster.  There are furlong markers so when I wear my stopwatch I can gauge how fast I am going, which is really helpful when it comes to judging my XC pace. 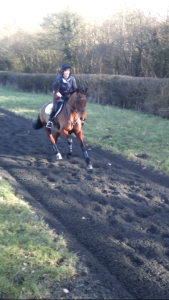 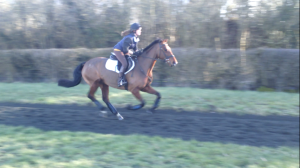 Best of all the sun was shining, although it does still feel rather chilly!!  Ali looks just fabulous in the sun 🙂 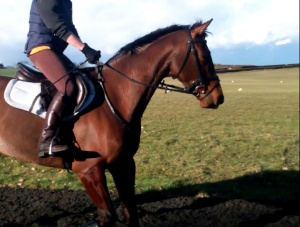 Brilliant day off work today to take Ali cross country schooling on the all-weather arena at Aston Le Walls.  Despite the continuing weather the arena surface was great and water fine too, even if there was a small amount of broken ice at the edge!  Ali was unsurprisingly fresh so I spent some time practicing some “gear changes” in canter to ensure I had the control I needed for the turns and skinnies I would be doing later.  I had her cross country bit on for the first time since last season, so this gave her chance to get used to it again too.  Once she felt rideable and warmed up, I popped over a few of the straight forward fences focusing on keeping a good rhythm.

We then moved on to the water, just cantering through initially to make sure she kept the same rhythm and forwardness as on dry land, which is especially important when it comes to jumping fences in the water.  She felt good and much more established at this than this time last year.  We popped down some steps into water and over the jump in the water. 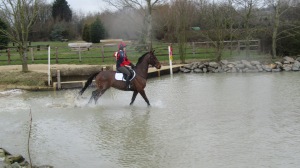 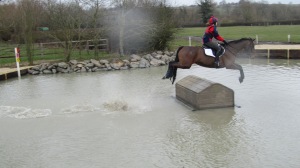 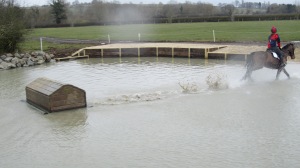 We linked a few fences together, practicing moving on faster then coming back to jump triple brushes, shoulder brushes, corners, steps etc.  She was brilliant and really focused on jumping between the flags, even when my reins were longer, such as after the steps down to a very skinny barrel!  She was certainly keen though, flying over some of the fences!! 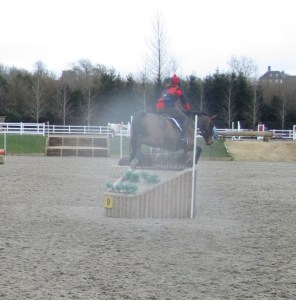 Lastly we jumped into the water – at first she over jumped this slightly but we both stayed in balance, she settled the next time so definitely worth doing!  They are always keen at this time of year, which is another good reason to get them out and doing some XC to settle back into it but she thinks it’s just so much fun!!

See some video clips of us here!

We’ve had a great day at the International Eventing Forum at Hartpury today.  First we heard from FEI dressage judge Christoph Hess.  We learnt lots about getting the horse to reach for the contact always aiming to push the hand forwards and use the leg.  He got Nicky Roncoroni riding her 11 year old 3-star horse Stonedge, whom she is aiming for the European Championships at Blair Castle, to put both reins into the outside hand to test the balance of the horse and security of the contact.  Although coming slightly above the contact at times, this actually helped him to take the rein more forwards rather than dropping behind the contact, which Nicky said he can be inclined to do especially when in the dressage arena at a competition.  He spoke about the importance of having the horse in front of the leg and continuing this into the lateral movements, where he has observed many riders lose impulsion during these movements in competition.  Even 4 year olds can start doing shoulder fore and learning to keep the forwardness.  He said when judging marks will be deducted for riding from the hand instead of the leg and he encourages judges to award marks for a “happy horse” as this means good training.  Another exercise he used with Sam Griffiths on his 2* horse that tended to tighten over the back was circling in each corner when going large around the arena, starting with 15m circles but potentially progressing to 10m circles.  This was to improve the way the horse moved into the corners, which is important during a test, such as when you need to go into shoulder in at the beginning of the long side.  This exercise can be developed so you do a circle in the corner, into shoulder in on the long side then move into medium pace, back into shoulder in and onto a circle again when you reach the corner.  (I’m not sure I could quite fit this into the 40x20m though!)  I was pleased that a lot of what her spoke about we do already but it is always good to have more exercises up your sleeve when one thing isn’t working!  I have just ridden Flicka, trying even more to ride from my leg and push my hand forwards, even when I felt I needed to use my hand I tried to use my leg, for example to keep her turning.  She improved loads in our half hour session and certainly felt like a relaxed “happy horse”, which he felt was most important!

In his second half Christoph spoke about the new FEI tests for this year.  It was helpful to watch some of the movement ridden and what they are looking for, from a judges perspective.  With 2* on Ali in mind, the most helpful parts were regarding forwardness of the walk and how the ride “turn about the haunches” – he explained these should be slightly larger than a pirouette and ridden from a medium walk.  He described the half pass in the 2* tests as “travers on the diagonal” because of them being over a longer distance.  An exercise he used to improve this was to start half pass then ride a few steps of shoulder in (in the same direction) and back into the half pass – this basically allows you to use the inside leg more, which is what I have been trying to do on Ali so I will definitely be using this exercise.

In the afternoon Andrew Nicholson spoke about his jumping training.  He started on a green 5 year old that had been ridden only a few months a moved up to an established 2* horse.  He then showed a horse that had come to him later in his training once already established at 3* but having some problems with XC control and how he has used all the same methods to try and improve the turning and rideability of this horse.

He had jumps set up as below pictures: 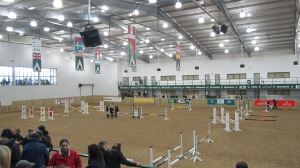 Left hand side of the arena 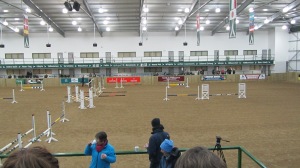 Right hand side of the arena

In the middle of the arena he had a circle of 4 fences – it was 10m from the middle of the circle to the middle of each fence but he said that it doesn’t really matter as you just ride the rhythm to teach the horses to learn to turn and jump and sort out their legs.  Not to improve the technique of the actual jump.  The jumps are small, especially for the young horses to encourage them to learn to “pop” and be conservative, this is important when they get to a small fence on the cross country as it usually has a drop behind it!  For the slightly more experienced horse, 2 of the 4 fences will go up to teach them to “slither” over these fences, like over the first part of a coffin fence.  He said they often over jump these fences at first and then make a mistake at the following smaller fence.  This exercise is also very good for the riders balance and just continuing to ride the rhythm no matter what happens!

The next exercise for the younger horses to ensure they are thinking and expecting a jump after a turn was the planks on the far wall (one seen in left photo and one in the right) – these are place 4m off the wall and are jumped both towards and away from the wall so the turn comes quickly upon them.  Once they were settled doing this (more difficult here with spooky banners on the wall) he added the upright between – so along wall, turn to plank, curving line to upright and back towards wall over second plank.

At the end when younger horses feel slightly tired he uses poles as an “A” on the upright and spread so that they do not lose their technique.  He doesn’t generally like to do too much grid work with young horses, as he feels they rush through on the straight line rather than having to think in the exercises above.

He will use the grid (on left of left-hand photo) with the older horses, especially when they have had a XC run to get the back and shortening in their stride again.  He had a ground pole, 3 metres to an upright, 3m to a smaller cross pole, 3m to a ground pole, 3m to an upright (later made into a spread).  He likes to use an upright as the first part rather than starting small and gradually getting bigger as many people will do with a grid to ensure you ride into it and the horses use themselves over the first fence and have to stay short in stride to the next.  It really got the horses snapping up in front.

The last exercise he did on a circle with the older horse that he was trying to get to turn and stay rideable regardless of what type of jump it had at the previous fence.  The circle was bigger than the first one used with the younger horses and included 2 uprights, a spread and a bounce.  So if the horse jumped big over the spread it had to quickly get back into rhythm and continue turning to the upright and so on to the bounce.  It really gets them thinking and listening, expecting to have to turn and jump – Andrew said if you take your weight slightly backwards (so very slightly behind the movement) the horse will then learn to expect a turn when you do this XC.

I will definitely be playing with these exercises at home, the ones I can fit in the arena anyway!  The other thing I really liked about the way Andrew trains his horses was how important it is, especially for the young horses, to ensure you make things black and white ie. when you say go they must go and when you say stop they must stop – not by being horrible but so they learn more quickly and stay focused on you even when the situation changes, such as when you go away from home.