Finally managed to write my report from Nunney last weekend, where Merlin (DHI Du Rouet, owned by Sue Bown) completed his first British Eventing competition in the BE100 and Ali came back after her short break for the CIC**

We had a busy day on the Saturday with Merlin doing all 3 phases and then Ali doing her dressage.  Merlin was first into his dressage arena and despite not going quite as well as he had been working in (isn’t it always the case!) he scored a fantastic 24.8 ~ we were especially pleased as the first horse in doesn’t always seem score as well and that he did just as well in affiliated competition as he had been unaffiliated.

Merlin all smart ready for dressage

We rushed off to walk the cross country, which was longer than he had done before over quite undulating ground.   But first we had the show jumping in front of the lovely Southfield House at Nunney.  I was happy with his round although as he improves it will get smoother!  But it was his first time on grass and he wasn’t at all bothered by all the trade stands etc. around the edge.  Most importantly he was clear so all to play for and time to get our speedy pants on for XC!!  See the video of Merlin’s SJ here.

Merlin set out XC well and listened, jumping nicely down the first slope over 2 brushes.  He spooked slightly before the 6th fence, I think because of the shadows of the trees but then flew the next few fences, including jumping the trakehner massive!!!  I was especially pleased how he coped with the step up out of the trees followed by a sharp left turn to a right-hand corner, which they only saw last minute, particularly for a big horse.  He skipped through the water no trouble and continued without incident all the way home plus I was delighted that we made it inside the time!!  So finished on our dressage score for 2nd place!!  You can see a short video of Merlin over a few XC fences on my Vet Gone Eventing Facebook Page.

Cross country had run a little late so it was then quite a rush to get Merlin sorted and Ali ready for her dressage.  Once I had got Ali studded up, I had a speedy change too into top hat and tails, which meant we only had 20 minutes to work in ~ she was rather excited about being at her first eventing outing since March so I had to do a lot of settling going through some of the transitions in the test and a few lateral movements.  I wasn’t as ready as I’d have liked but she did feel good!  In the first movements of the test she was a little, shall we say opinionated(!) including a rather inattentive first halt but she just got better and better.  She had good bend through her lateral work and her canter work was great but I was especially pleased with her second medium trot, in which she kept the balance all the way across the long diagonal just proving how much stronger she is getting.  I was thrilled with her personal best mark of 40.8 for 4th out of 70 after dressage!!  See a video of her dressage here (FEI 2* A).

We walked the 2* cross country and then headed off to Wincanton Racecourse for the night, where the horses enjoyed their dinner and settled well.

Happy in their overnight accomodation!

On Sunday morning we drove back over to Nunney fairly early so that I could walk the course once more (see course photos here).  The show jumping looked to be jumping well, so it was just a case of remembering everything Nick had told me the Monday before… ride forward, keep your arms soft!!  I took Ali to work her on the flat and she felt more settled than the day before, although once over by the show jumping she had remembered that it was fun time!!  She felt great and I was pleased with the forward rhythm we were keeping.  For once, I actually managed to keep this rhythm and get a good feeling over the first fence ~ she jumped her socks off for a fab clear!!  So pleased and so confidence giving 🙂  See a video of her round here.

Onto the XC, Ali was extremely keen going down to the start trying to jog rather like a racehorse most of the way down!!  There were plenty of questions with the first real problem at fence 6 – a decent step down, 4 strides to a narrow brush, 3 strides to an owl hole.  Ali really attacked this flying through the second two elements on a mission!!  She just loves it so much!

Step to brush and owl hole to the left at 6

She flew the next few including over the massive ditch at fence 10! 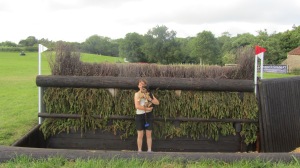 Next was the fence causing a fair few problems: a fairly narrow “turtle” with quite an awkward approach and drop down into the first water followed by a skinny brush on the way out – although I think most faults had been at the “out” part b, I was most concerned about getting in as I thought she may suddenly spot the water.  She twisted slightly on the way in but landed well and flew over the triple brush, clever girl!!  She was flying and jumped well over a double of decent rails into the main water too and so straight over the brush corners coming down hill second last.  Another fantastic clear at 2* and after a break too, just an amazing mare!  I was a little disappointed with how many time faults we had (me hanging around too much – I think spent too much time taking a breath after the last water and thinking “what’s next”!! – kick on next time!) but we still finished 14th from a strong field of 70 and only 56% went clear XC!!  Just so happy she’s back doing what she loves so well again 🙂 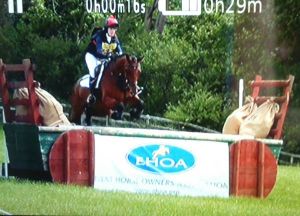 Flying fence 2 – off the video so a little blurry

I plan to do some show jumping with Ali and Flicka in the next couple of weeks then Ali is off to Barbury for the CIC** and Merlin and probably Flicka to Stafford the following week for the BE100 and 5yo class repectively.  Fingers crossed!!